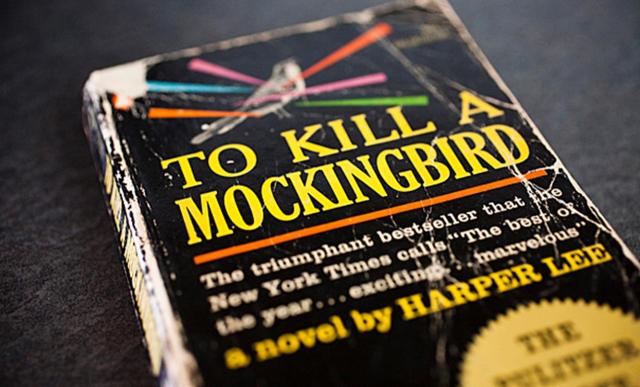 It’s time for English Lit 101, with Professor Dean Esmay. In this lesson he’ll be covering Harper Lee’s 1960 classic novel To Kill a Mockingbird*. As Dean Esmay explains for the youngins:

I was asked recently by someone still learning about the Men’s Human Rights Movement if there were any books, movies, or other media that are generally popular with or illustrative of what the movement is all about. He was really surprised when I mentioned Harper Lee’s 1960 masterpiece, To Kill a Mockingbird. To me that’s funny; I think Harper Lee’s masterpiece more relevant today than ever.

Perhaps one of the great tragedies of forcing kids to read “the classics” while they’re in school–and To Kill a Mockingbird is assigned reading in schools all over North America–is that they don’t learn to love books like this, they learn to view them as a chore. So they move as quickly through them as they can, and then forget them. On the other hand, maybe it’s a hidden blessing, as an article like this one might suddenly prompt them to remember it, and look at it anew as adults.

Certainly, To Kill A Mockingbird portrays racism. But at a much deeper level, as Harper Lee herself said, the story isn’t about race. No, it’s about prejudice. And while this probably wasn’t her intent, the book also illustrates the fact that for centuries, the best way to get people irrationally angry and defensive is to accuse “the bad man” of hurting a woman.

To Kill A Mockingbird‘s central plot line is about a man falsely accused of rape, and an entire community that presumes he’s guilty (of something or other) and presumes that anyone who defends him is scum, while we are sometimes led–mostly by our own prejudices–to believe that another innocent man is guilty because he’s just plain strange: “strange” means “different” and “different” means “dangerous” don’t ya know?

I have said many times that we as men are all Tom Robinson now. I have had people scratch their heads in confusion over that, or become outright angry with me, suggesting that this story is about Racisim [sic] In The Old South–even though in one of the few interviews she ever gave about her own work, Harper Lee states unequivocally that the book isn’t really about racism at all.

What Harper Lee wanted us to think about, besides her really good story, is prejudice, and the lack of empathy that comes from trying to understand other people–from putting yourself in other people’s shoes.

What most of today’s Men’s Human Rights Activists notice is that, since To Kill A Mockingbird came out, instead of becoming a more enlightened society that thinks a black men deserves the basic rights of due process and presumption of innocence that are supposed to be the birthright of all free people, we’ve become more “enlightened” by putting the presumption of guilt on all men.

This analysis is certainly . . . different. While Esmay acknowledges the racial narrative of the story, he weirdly downplays it in favor of his own pet narrative about women and false rape. Of course, entirely absent from Esmay’s discussion is the possibility that Bob Ewell (the drunken, racist, dirt-poor antagonist) had intimidated his daughter into lying about her own rape.

Atticus Finch’s cross-examinations of Bob and Mayella Ewell, as well as his closing argument, suggest that Bob was responsible for Mayella’s physical injuries. (The physically handicapped Tom Robinson, as Finch tried to establish, could not have committed the crime in question.)

Finch also pointed out that the motive for pinning the blame on Robinson was society’s disapproval of interracial relationships. Which means either Mayella, after being disciplined by her father and of her own accord, concocted the false rape story, or her father threatened her with more violence if she didn’t claim Robinson raped her and stick to that story. (At one point during Mayella’s questioning, as perfectly illustrated in the film adaptation, she fearfully glanced at her father when Atticus Finch demanded she tell the truth before reiterating that she was victimized by Robinson.)

That she was coerced by another man — in this instance, her father — into making the false claim would not mesh with Esmay or AVfM’s desire to portray a great majority of rape victims as manipulative liars. Which is probably why Esmay brings in this tidbit:

Indeed, while it has become a taboo subject to discuss in academia, back as the 1990s heretic researcher Eugene Kanin found that in studying why women in particular lie about rape, the most common reasons were “…to serve three major functions for the complainants: providing an alibi, seeking revenge, and obtaining sympathy and attention. False rape allegations are not the consequence of a gender-linked aberration, as frequently claimed, but reflect impulsive and desperate efforts to cope with personal and social stress situations.”

A “heretic researcher” roughly translates to one whose academic research has been called into question or, at the very least, appears suspect. Kanin’s 1994 study on false rapes, which concluded that somewhere between 40 to 50 percent of rape allegations were fabricated, is indeed a flawed one.

It was far from national in its scope, having focused on a small Midwestern city between 1978 and 1987, and the sample size was a mere 109 rape complaints. Moreover, a “false rape accusation” was one which the police determined to be false, after the complainant withdrew her complaint for whatever reason.

Esmay goes on to say that false accusations are “frequently worse than an actual rape” since “a falsely accused man may have his life ruined, he may have his family destroyed, he may be raped himself in prison” or “he may ultimately wind up dead.” And in a conspiratorial postscript, Esmay determines that the reason there has never been a thesis done on To Kill a Mockingbird and false rape accusations is that the elite feminist establishment would never allow for such a thing:

While this is one of the most acclaimed novels of the 20th Century, winning not just popularity but an endless number of awards and translated into countless languages, it’s impossible to do anything more than a superficial review of this book without addressing the fact that its most central and dominant plot point is a woman who has lied about being raped.

Possibly during the 1960s someone could have written an academic thesis on this masterpiece, but it would have seemed too early when the book was less than a decade old. By the 1970s, feminist indoctrination became standard in academia, and despite the fact that this book was written by a woman, and is indisputably one of the greatest novels of the last 100 years, no one would dare: feminists would brand them rape apologists, and any actual feminist who tried analyzing the book herself would likely have an ideological meltdown trying to talk about it without disrespecting its author–and since the author is a woman, that would be unthinkable.

See? The central point here, as Esmay explained, is “a woman who has lied about being raped.” Anyone who points this out would be blacklisted by the feminists who destroy all that is good and honest in society. Poor Dean Esmay. Sometimes I feel like Atticus Finch myself:

* For the record I absolutely love this book, and the film adaptation which I just watched again a couple of nights ago. To me, there are several themes in the book, but the strongest for me would be standing up for the downtrodden and oppressed, especially when no one else will do so.