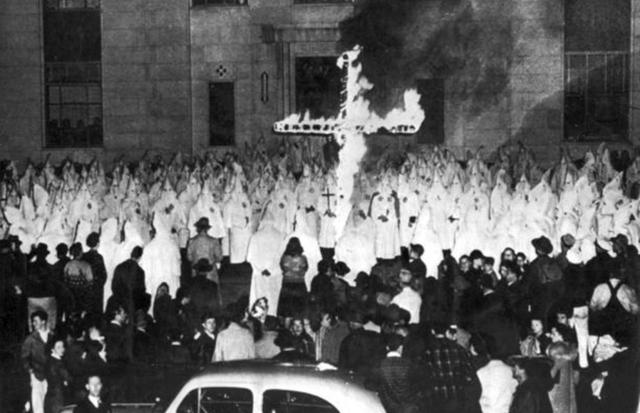 Tonight we were (sort of) surprised to learn that Anthony Cumia (of The Opie and Anthony Show fame) had a particularly nasty Twitter meltdown directed at an unidentified black woman whom he claims assaulted him.

According to Cumia, he was innocently taking pictures of unsuspecting women from behind (oh, like you never have) when a black woman took offense to this and started attacking him out of nowhere. He then says that he refused to fight her back, and that’s when four or five black men suddenly appeared and backed her up. Let me say that I find his story doubtful.

All we have to go by are a couple snapshots of his supposed assailant and his word — he never did go to the police with this story. His past history of racist rhetoric doesn’t help his case either. Nevertheless, it didn’t stop him from sending out as many obnoxious, racist and sexist slurs as possible in 140 characters or less. For example: 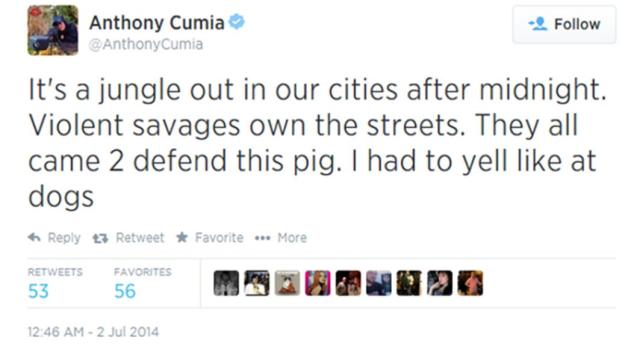 Here are some bonus ones which have since been deleted:

Naturally this caused his employers, SiriusXM, to fire his sorry ass. Have fun standing in the unemployment line, bro. Some pathetic human beings predictably rushed to defend Cumia, mainly on right wing news sites. Here’s a sampling from Glenn Beck’s website The Blaze:

Apparently President Obama has something to do with this:

Welcome to the new world of Obama / Holder where anything said or done by blacks is ignored and all reactions by whites is labeled as racist and inappropriate. Anthony is clearly a victim here, and when he did not even respond in kind except language, he is fired. Wake up before it is too late.

Blacks are actually much worse off, ever since B. Hussein Obama got elected.

They can no longer play the race card.

America now has a black president, proving that white on black racism is virtually nonexistent.

The playing field is now level. The white man guilt has finally worn off of most white Americans.

Violent blacks are finally being called out and exposed. No more free passes for bad behavior.

It’s Obama’s world, we just live in it… So He thinks… Because “We the People” are starting to stand up in this country! — PastorSteve

JohnofOregon apparently hears this type of toxic rhetoric all the time on television. I really wonder what shows he’s watching:

I seriously cannot see anything wrong here. He said nothing that I have not heard or seen on government controlled And regulated tv. — JohnofOregon

We’re in the end times when bad is good and good is bad. — quicksdraw

ms2020 has no clue what was wrong with calling black people “animals” and women “cunts” and “bitches”:

And, of course, a smorgasbord of violence and racism:

According to “Correct-Mess”, seen nationwide; blacks are entitled to any and all profiled favorite protections, along with illegal alien invaders. no matter what they do. No “Equal” anymore. — labec

So. We’re now in a place here in the U.S. where a minority can physically attack someone for inadvertently taking their photo in a public place, and if you’re white, you’re required to smile and take it. She can speak to HIM in a racist way, but HE’S the racist for calling it like it is. See what’s going on? Kudos to Opie for showing physical restraint, because it probably would’ve been legally justified if he shot her in self defense. Sad, isn’t it? We’ve seen this kind of excused reversed racism over and over. Without a doubt, we’ve created a protected class here in the U.S. Cue Eric Holder. — DokG

There is no way he should have been fired over this! NONE! He was the one who was punched by a savage… YES, SAVAGE… red or yellow, black or white… she punched him like a savage. — TMGallagher

He should have just shot the animal in self defense and gone home and had a beer. — Rogue-Dragon

We’re supposed to be celebrating the fiftieth anniversary of the Civil Rights Act, but we can see from this (and other examples) what it has brought us. Race relations and everything else was better in America before the so-called “civil rights” movement of the sixties and the misguided legislation and political correctness that resulted. — Robert999

And here’s some white whine courtesy of Breitbart:

If the woman were white and he said the same things, no one would have said crap. There was nothing racist about his rants. I read the entire time line. — jkpalmdale

The only people on earth that can be racist are white people. Everyone else can say as they please. — Harrisonsuxit

It’s only racist because he’s white and the woman was not. If these words would have been spoken by anyone other than a white man, nothing would have happened. Political Correctness and charges of racism are attacks on whites, more specifically white, conservative men. — zxm

Black people in this country have been coddled and afforded a double standard of behavior since the sixties. Not to mention the trillions in welfare benefits. All this has done is make them totally dependent on Federal, State & local governments and a colossal collective of lazy aholes with no respect for others. — Chef013

If the attacker was white, would he have been fired? If no, then Sirusxm are a racist company and should be sued! — Syberlink

This commenter certainly lives up to his user name:

Another victory for PC censorship… I have always maintained that inside of every PC Liberal there is a Stalinist concentration camp guard trying to get out, and this incident is proof of just how right I am… We cannot speak our minds, get mad or even tell a joke without a Liberal hypocrite jumping down our throats…

Words… WORDS can cost a person their job and their livelihood… How sick is that?… I have to bend over backwards to self-censor my words just to make a post on this forum… Because incorrect ‘words’ and ‘thoughts’ are the problem in the world… Like him or hate him, Anthony Cumia being fired over words is not just dangerous, it’s one more step to Orwell’s vision of 1984…

Liberal Democrats have made us prisoners in our own minds… — MarchHare